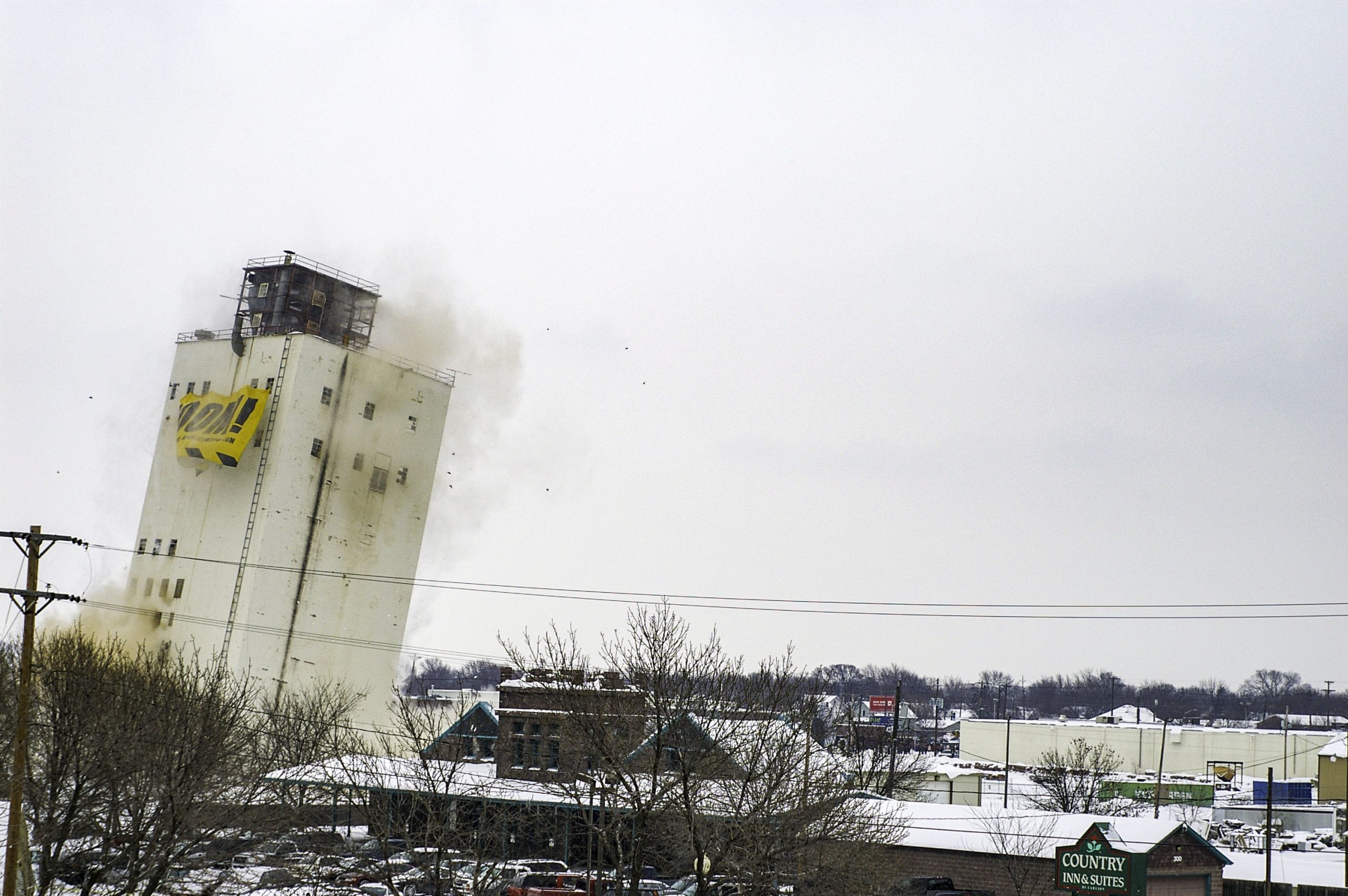 Fifteen years ago on this date, my son Michael’s high-pitched voice shot across the globe via the AP Radio wires, kicking off a worldwide viral news story with his declaration, “It didn’t work! It didn’t work, Dad.”

It was Dec. 3, 2005, as crews prepared to take down the 202-foot-tall abandoned Zip Feed Mill tower — Sioux Falls’ tallest structure — in a dramatic blast clearing the way for a new office and retail center. I was reporting on the demolition for the Associated Press, so I set up my camera and tripod atop a nearby parking ramp for photos and ran my digital recorder to capture crowd comments (click on the audio player “Play” button).

The detonation crews did their part, drilling holes into the structure’s supporting columns, stuffing them full of explosives and triggering the rumbling blast.

But 10-year-old Michael was right. It didn’t work.

The back part of the half-century-old grain elevator had rotted so badly that it foiled precise implosion plans, leaving the building to collapse a mere 40 to 50 feet before it wedged into the basement yet remained upright, sporting a newly acquired tilt to the east.

Boisterous cheers from thousands of onlookers who braved chilly temps quickly turned to quips such as “You’ve got to push it over, man,” “Noooooo!” and “Look, the Leaning Tower of Zip!”

It took construction crews armed with a crane and wrecking ball months to clear the site and make way for the architecturally designed six-story Cherapa Place.

The Zip blast debacle came to mind a couple months ago as I stood on the tower’s former footprint at Cherapa Place for the book launch of Forward Sioux Falls. I authored the 94-page hardcover published in late September by Throne Publishing Group. Forward Sioux Falls tells the story of the economic development program’s 30-plus-year history, highlights how it helped shape the Sioux Falls landscape and shares community-building insight from some of the city’s most prominent business leaders.

In many ways, the Zip tower’s folklore fits into the narrative of Sioux Falls’ dramatic transformation.

The Zip Feed Mill was considered state-of-the-art when it opened in 1956, and it served the community well for nearly 50 years. But Sioux Falls over the decades was progressing from a small town heavily dependent on ag to a diversified Midwest destination with an economy fueled by growth in finance, health care and biotechnology.

By 2005, the dilapidated structure was standing in the way of progress.

Cherapa Place, a $15-million, 142,000-square-foot office complex and retail center, helped spark the expansion of downtown Sioux Falls beyond the east bank of the Big Sioux River. The gorgeous six-story structure, which features a two-story base of local quartzite, was the first South Dakota project to earn LEED Gold Certified status from the U.S. Green Building Council (USGBC).

The parking ramp that served as my vantage point for the 2005 tower demolition also toppled to spur development, clearing way for the construction of a modern hotel and four-story office complex. And the ongoing redevelopment of a former rail yard into Railyard Flats continues to expand downtown Sioux Falls’ footprint.

The failed demolition may have spurred some viral publicity and tongue-in-cheek ribbing, but Sioux Falls has earned plenty of serious accolades over the history of Forward Sioux Falls’ efforts from the likes of Money magazine, Forbes, SmartAsset and Livability.

Does the Zip Feed Mill offer a lesson that sometimes the status quo digs in so deeply that it takes a crane and wrecking ball to progress beyond the past? Does it humble us by noting that no matter how precise the preparation, circumstances beyond our control can hamper our plans?

Or does it provide a gentle reminder to continue to push Sioux Falls forward and show pride in our city, but also not take ourselves too seriously? We’re all part of a larger globe filled with numerous people who have overcome instances of “It didn’t work” to reach for success. And our commonality is that when something doesn’t work, we push forward to achieve our goals.